You are here: CBDInsider.com > CBD Oil for Pain 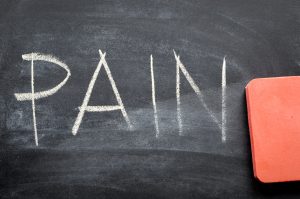 CBD is effective for pain because of its natural analgesic, neuroprotective, and anti-inflammatory properties.

Pain is a generalized term that can be applied to almost any problem that a person encounters during the normal course of living life.

A person can consider something as simple as an itch as a type of pain. A person could bite their tongue or the side of their inner cheek and experience pain. A person that has a migraine can also be said to be in pain. And people can feel pain for emotional situations.

No matter how a person experiences pain, there’s a desire for it to end quickly. And while many will look for aspirin, acetaminophen, or ibuprofen as a quick relief to dull the pain, a better alternative may be CBD.

The International Association for the Study of Pain (IASP) defines pain as an unpleasant sensory and emotional experience associated with actual or potential tissue damage, or described in terms of such damage.” https://www.iasp-pain.org/Education/Content.aspx?ItemNumber=1698#Pain

Medical science generally classifies pain is one of 6 ways:

Duration or Chronic pain is pain that a person has for a long period of time. The IASP defines it as pain with no biological value that persists past normal tissue healing.

Nociceptive pain is caused by intense chemical, mechanical, or thermal stimulation of sensory nerve cells called nociceptors. These cells produce a signal that travels along nerve fibers via the spinal cord to the brain.

Neuropathic pain is pain caused by damage or disease affecting sensory neurons and pathways that at the surface or inside the body.

Neuropathic pain may be associated with abnormal sensations that are manifested by burning, wetness, itching, electric shock, and pins and needles despite any evidence of damage or pain from normally non-painful, often repetitive stimulation.

Psychogenic pain is physical pain that is caused, increased, or prolonged by mental, emotional, or behavioral elements.

Some examples of psychogenic pain include:

Breakthrough pain is temporary pain that occurs abruptly and is not affected by the patient’s regular pain management. This type of pain is experienced by patients already on a measured course of medication, but pain spikes and “breaks through” the relief barrier that the medication offers.

Pain asymbolia and insensitivity are situations where a normal person would feel pain, however, the patient isn’t feeling the pain due to a temporary situation (such as a rush of adrenaline) or a congenital condition that makes the person incapable of feeling pain. The inability to feel pain can be dangerous to a person as pain is usually a “warning sign” to prevent a person from inflicting more damage upon themselves.

The last decade has thrown the CBD into the limelight. Most people that hear the letters CBD automatically think marijuana. And it’s true that CBD can be derived from marijuana. After all, CBD stands for cannabidiol and it is derived from the cannabis plant.

But not all cannabis is marijuana and not all CBD comes from marijuana.

In order for cannabis to be considered marijuana, it usually has a high concentration of THC or tetrahydrocannabinol. This is the psychoactive part of marijuana that makes the user “high”.

If the cannabis only has trace amounts of THC, then it is considered hemp.

CBD, like THC, is a cannabinoid. Cannabis plants have 113 known cannabinoids. These cannabinoids have been found to react to a system that regulates the central nervous system called the endocannabinoid system (ECS) in both animals and humans that affect appetite, pain-sensation, mood, and memory.

In the United States, over-the-counter CBD is extracted primarily from hemp. In order for it to be considered legal, the THC content must be less than 0.3%.

The entire hemp plant is pressed to extract the CBD concentrate, however, the seeds of the plant are the most potent source of CBD, and some manufacturers only press the seeds for their CBD.

Once the pure CBD is extracted, manufacturers develop it into a variety of forms. These forms include:

CBD can be an effective tool for many kinds of pain. One reason is that CBD has strong anti-inflammatory properties. Touch receptors, follicles, sebaceous glands, blood vessels, and nerve endings are all served by the ECS that processes CBD.

The CBD and the natural cannabinoid receptors work together to send relief to the affected area.

Joint pain can come in many forms. It could be a physical injury that can heal over time or a degenerative condition that may worsen over time. In either case, CBD has been shown to help.

Some forms of joint pain that CBD can help treat are:

Over the last 15 years, The National Institutes of Health’s (NIH) has conducted several studies on the effects of CBD on joint pain.

Among these studies are:

When skin is damaged due to burns, the pain can be intolerable. The skin is one of the more pain sensitive organs because it contains nerve endings, blood vessels, glands, touch receptors and more. CBD not only provides pain relief through anti-inflammatory properties but also through its analgesic properties.

The study found that “when compared to the controls, [oils] significantly improved wound contraction after day 10. Epithelialization (the beginning of new tissue) time in the [oils] group was significantly faster than in the other groups (20 vs. 25.5 days). Histopathological and immunohistochemical findings confirmed the efficacy of the [oils].

A new therapeutic remedy was introduced for the treatment of burn wounds. Further clinical and molecular studies are suggested to determine the exact mechanism(s) involved in the burn wound healing effect of [oil].”

It further went on to talk about CBD and hemp: “other components of (cannabis) influence its pharmacological activity. One of these components is cannabidiol (CBD). Analgesic and anti-inflammatory effects have been reported in animal studies on the CBD present in hemp seed oil.” (https://www.ncbi.nlm.nih.gov/pmc/articles/PMC5292211/)

The effects of CBD on migraines was studied and the results were presented at the 3rd Congress of the European Academy of Neurology. The study was conducted over 3 months with a 1 month follow up. The results showed that cannabinoids reduced pain intensity among migraine patients by 43.5%. https://www.ean.org/amsterdam2017/fileadmin/user_upload/E-EAN_2017_-

This fits in with the fact that CBD has neuroprotective properties. One study that evaluated the effects of CBD on Parkinson’s disease stated that: “In summary, our results indicate that those cannabinoids having antioxidant cannabinoid receptor-independent properties provide neuroprotection against the progressive degeneration of nigrostriatal dopaminergic neurons occurring in Parkinson’s disease.” https://www.sciencedirect.com/science/article/pii/S0006899306034718

The study on Iranian folk medicine that was cited above mentioned: “analgesic and anti-inflammatory effects have been reported in animal studies on the CBD present in hemp seed oil.” As an analgesic, CBD can be used for minor pain. Injuries such as a sprain or a pulled muscle can benefit from the use of CBD.

If the skin or muscle is inflamed, CBD can be of benefit in that case as well, allowing it to not only kill the pain but quell the inflammation.

In these cases, topicals such as creams, ointments, and transdermal patches prove very effective in helping ease the pain and speed up healing.

The natural anti-inflammatory, analgesic, and neuroprotective properties of CBD make the cannabinoid an obvious candidate to treat pain.

Pain involves both the location of the affected area and the signals that the nervous system sends to the brain. So when a substance that works with both naturally (which CBD does because of the ECS) then it will be more effective than something synthetic in most cases because the human body was designed to accommodate the natural substance.